In 1850 the residents of Machias established the first public high school in the town. It was located in Libby Hall atop Steele’s Hill. For those unfamiliar with the area, the hill is located on Lower Court Street. The hill was also the site of the famous Liberty Pole erected during the Revolutionary War Era by Machias rebels to caution the Crown of the anti-British sentiment in the town. The building can be seen in an original painting by former MMHS art instructor, Ed Foster. The building served the town until 1954 when the current Machias Memorial High School was opened.

Libby Hall was a two-story structure which housed a full academic program. There was a large assembly room along with various classrooms. Drama productions and musical presentations were generally held within the building itself. The athletic teams became known as the Bulldogs, and the school colors became black and orange. Eventually, the school song, modeled after the World War I song There’s a Long Long Trail A-Winding, added a great deal of pride to the students and alumni of Machias High School and Machias Memorial High School. Although the traditional school song has never officially been replaced, a new school fight song, modeled after On Wisconsin, was adopted in the mid to late 1960’s and is now more commonly played at school events, much to the chagrin of older alumni. 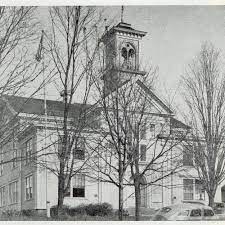 The original building began showing its age, and by the 1950’s residents of the town started planning for a new high school. The citizens wanted to honor the area veterans from World War I, Korea, and previous conflicts so the town named the new school Machias Memorial High School. The main building was constructed just up the road at what was then 109 Court Street. The new address is 1 Bulldog Lane. The school was built on the site of a large, open field with a new baseball field on campus. The building was very modern for its time and was a one-story structure with a very tall chimney. Rumor had it at the time that the chimney was so tall so that they could add a second story if need be.

The building did not contain a gym, and basketball and plays were held at Powers Hall on the Washington State Teachers College campus. This fact made it difficult for our students to compete athletically and in fine arts competitions. The town fathers began to get input from the citizens of Machias that they wanted a new gym built which could house not only sporting events but also physical education/health classes, and dramatic presentations. Citizens of Machias came together and privately raised a large sum of money for the project. The gym was built on campus and was dedicated in 1961.

In the early 1960’s the Navy and Air Force facilities were constructed and the early Baby Boomers began to hit secondary schools which increased enrollment dramatically. In the spring of 1965 a language lab, science room and a large study hall room were added to the West Wing: The school soon added Special Services programs as well as Industrial Arts programs including construction and automotive. A building was built beside the gym to house the Industrial Arts program. The school population reached its peak in the late 1960’s and early 1970’s.

In the early 21st Century the facility was updated further. Another small building was built which now houses the MMHS Alternative Education Program as well as the Jobs for Maine’s Graduates Program. Science labs were modernized, new ceilings and lighting were installed, and a new slanted roof was added to the main building. Under the leadership of current principal Nicole Case a new open air pavilion and outside exercise equipment which is open all community members were added. This year a new road and parking area were constructed behind the gym, and plans are in the works for a new gym floor.

Although we experienced an era of no to slow growth, MMHS is now experiencing a big growth in student population. There are plans to build on another classroom and to bring back lunch from our own kitchen. It looks as though the future is so bright, we gotta’ wear shades!